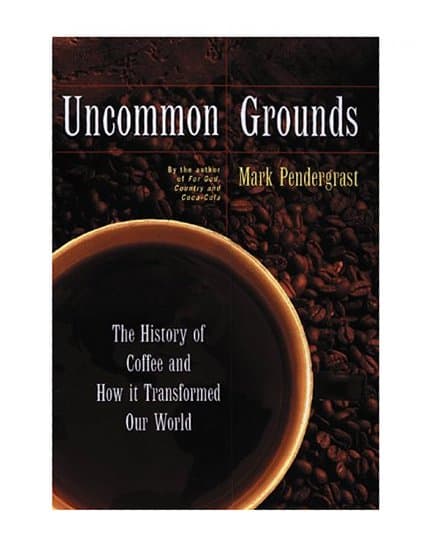 If you like coffee and enjoyed this infograhic, you’ll probably like the book Uncommon Grounds: The History of Coffee and How It Transformed Our World.

Uncommon Grounds tells the story of coffee from its discovery on a hill in Abyssinia to its role in intrigue in the American colonies to its rise as a national consumer product in the twentieth century and its rediscovery with the advent of Starbucks at the end of the century. A panoramic epic, Uncommon Grounds uses coffee production, trade, and consumption as a window through which to view broad historical themes: the clash and blending of cultures, the rise of marketing and the “national brand,” assembly line mass production, and urbanization. Coffeehouses have provided places to plan revolutions, write poetry, do business, and meet friends. The coffee industry has dominated and molded the economy, politics, and social structure of entire countries. Mark Pendergrast introduces the reader to an eccentric cast of characters, all of them with a passion for the golden bean. Uncommon Grounds is nothing less than a coffee-flavored history of the world.