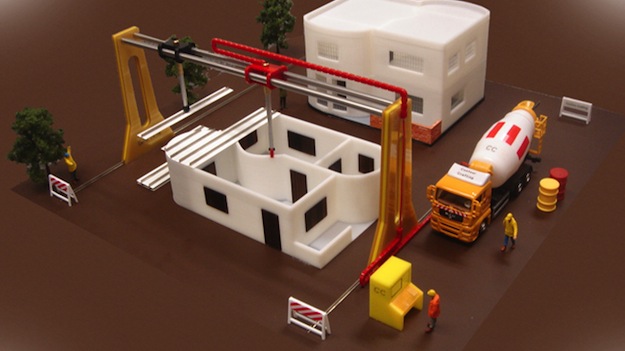 An engineering professor, Behrokh Khoshnevis, at the University of Southern California, is really thinking big: He has figured out a way to build housing with a giant 3D printer.

Here’s how it would work, according to the blog Pop Sci. The apparatus, instead of being the size of your typical laser printer, would actually be somewhat bigger than the house it would build through a concrete layering system called Contour Crafting.

The professor explained the process in a speech at the TEDx conference, which you can watch. (Start at 4:30 to see the animation demo.) In the video, the professor demonstrates how the machine lays down a concrete foundation, puts up walls, even inserts wiring and plumbing, and eventually constructs an entire building, which Professor Khoshnevis says can be completed in less than a day. (All that’s left to add are doors and windows. ) Robotics could even be used to add details like tiles, says the professor.