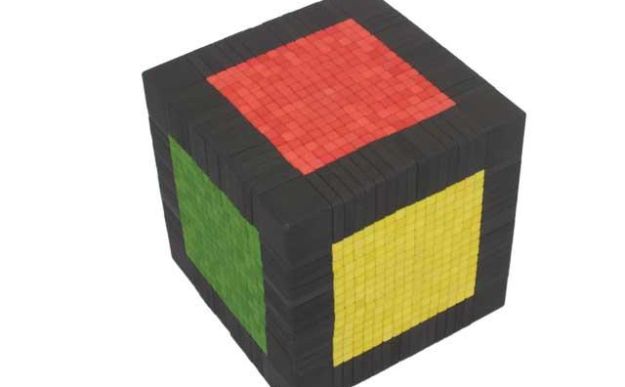 If you thought a normal Rubik cube was hard, Oskar van Deventer has created one so big that even he cannot solve it. Metro.co.uk states that the dimensions for this “Over the Top” product is 17x17x17.

He said: â€˜The puzzle has never been solved, although people have solved virtual versions of it on the internet. If you can solve a regular Rubikâ€™s cube you could work out how to solve my version but it would take a lot of work. Itâ€™s quite nice to make pictures from all the colours on the cube.â€™

The Dutch scientist had the puzzleâ€™s movable pieces cut by laser, then spent 15 hours colouring them.

Mr van Deventer said: â€˜Iâ€™ve been designing puzzles since I was about 12 and I thought it would be nice to go over the top and build an even larger Rubikâ€™s cube.

There’s a video of the cube after the jump.