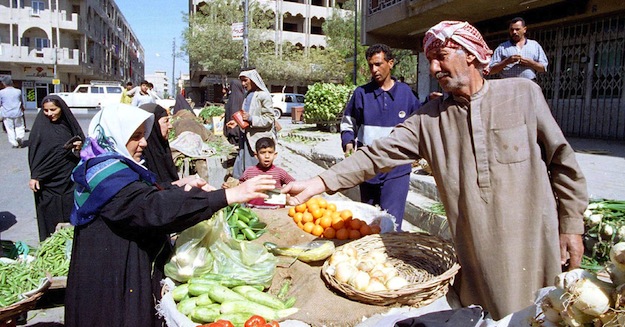 Iraqi’s culinary tastes have changed since US tanks rolled into Baghdad in 2003, and one restaurant there is leading the charge:

Diners sitting at outdoor tables among the date palms would occasionally hear the sounds of rockets flying overhead, often aimed at the Green Zone on the other side of the Tigris River. The rockets, which sounded like a train roaring overhead, never fazed the neatly dressed waiters who maneuvered between tables balancing trays heaped with rice, kebabs, salads and grilled fish.

“The owner insisted we keep this restaurant open,” manager Haider Abbas says as he moves among the tables, shaking hands and chatting with customers.

Baghdad is more peaceful now, but Saysaban and other restaurants face a new challenge: changing Iraqi tastes.
Iraqis are increasingly seeking out Western or international cuisine when they go out to restaurants. Once cut off from the world, most households now have satellite television and Internet access, exposing Iraqis to Western eating habits.