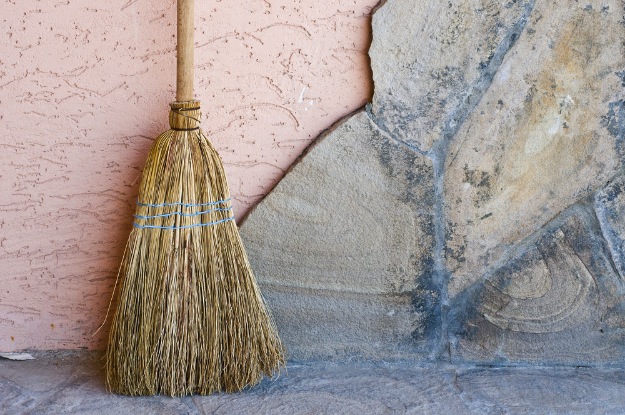 Slate has up the history of the broom:

Modern broom-making truly began, however, with the rise in cultivation of a previously underappreciated crop that would soon be called â€œbroomcorn.â€ A species of tasseled grass (sorghum vulgare) that somewhat resembles the sweet corn plant, broomcornâ€™s seeds and fibers had previously been used for animal feed and not much else. Then, according to historian Gregory H. Nobles, in 1797, a farmer from Hadley, Mass., named Levi Dickinson had the idea to use the grass to make a broom for his wife, as well as a few extra to peddle to neighbors. His broomâ€”a round bundle of broomcorn lashed to a stick with some weaving around the topâ€”proved to be more durable and effective than previous models, and it was soon in demand around the region. By 1800, Dickinson and his sons were making several hundred brooms a year to sell throughout the northeastern United States.

Other farmers quickly planted acres of broomcorn and joined the trade, as broom cultivation and construction was a fairly simple side-job that could fit easily into the pre-established rhythms of agricultural life. By the first few decades of the 19th century, a number of versions of the â€œbroom machineâ€â€”a set of vices, clamps and a foot treadle (essentially a tension apparatus that uses the broom-makerâ€™s feet to keep a roll of twine taut as he winds it around the broom corn)â€”had been developed that made broom manufacturing even quicker.