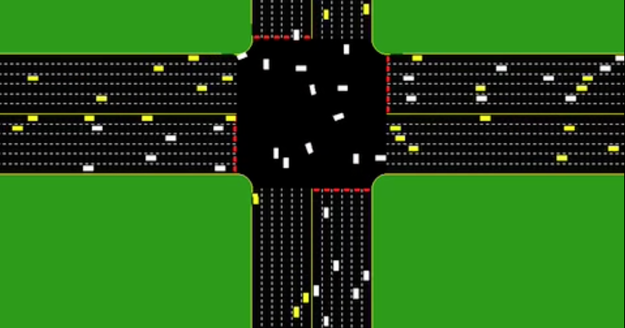 They realized intersections will change not just because theyâ€™ll need to accommodate driverless cars, but because driverless cars will make intersections much more efficient. Right now, you may wind up sitting at a red light for 45 seconds even though no one is passing through the green light in the opposite direction. But you donâ€™t have to do that in a world where traffic flows according to computer communication instead of the systems that have been built with human behavior in mind.

â€œThere would be an intersection manager,â€ Stone says, â€œan autonomous agent directing traffic at a much finer-grain scale than just a red light for one direction and a green light for another direction.â€

Because of this, we wonâ€™t need traffic lights at all (or stop signs, for that matter). Traffic will constantly flow, and at a rate that would probably unnerve the average human driver. The researchers have modeled just how this would work, as you can see in the animation below. You have to admit the patterns are mesmerizing even if the whole idea still seems far-fetched. The yellow cars pausing at the intersection in this simulation are old-timey human-driven vehicles that havenâ€™t yet caught up with the future (because while we may all be riding in driverless cars one day, that day wonâ€™t arrive overnight):

Untitled from Amanda Erickson on Vimeo.