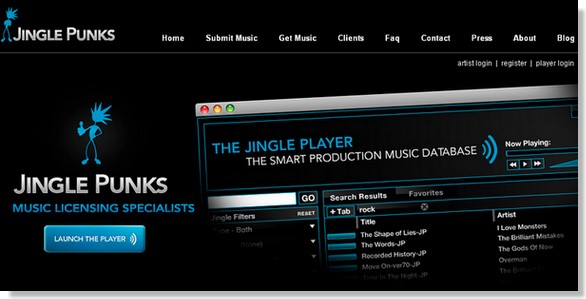 Like many aspiring rock stars, Jared Gutstadt, 32, used to split his life in half. He held down a day job editing television shows for clients like Disney, MTV and VH1. He kept his nights free for what he really wanted to do: make music, reports CNNMoney.

That changed two years ago, while Gutstadt was editing an independent film that needed a song with a Pulp Fiction-like vibe. After hours spent trying to find the right sound, he was left with two options. He could keep wading through stock libraries of tunes, a time-consuming process that was unlikely to yield anything edgy or exciting. Or he could seek out a popular track, facing the heavy fees associated with established recording artists.

Then came his “eureka” moment: Why not create a common-sense search engine, one that would use pop culture referents and simple adjectives like “dark” or “retro” to help film and television producers find the right songs? And what if those tracks were affordable, interesting songs from emerging artists?

“I realized if we could develop a system which aggregated and organized music in this way, the user experience would end up being far superior to any other system for production music,” Gutstadt said. And so Jingle Punks was born.