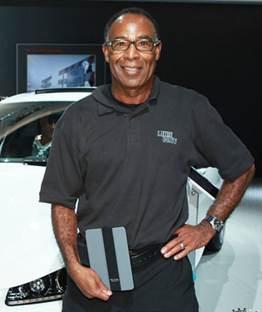 Have you ever met a Fire Captain, disaster preparedness officer, small business owner, and inventor all in one?

Meet Christopher Cooper, who at four years old wanted to be two things when he grew up… a fireman and an inventor.

Through his hard work and determination Christopher joined the Los Angeles Fire Department and climbed the ladder to become a Fire Captain and Disaster Preparedness Officer.

A leader among great heroes, Christopher knew there was something missing in his life. So, He devoted his free time and energy to his passion of inventing.

He dreamed up all kinds of products and spent his off-duty hours turning these ideas into realities.

After watching an iPad-user awkwardly clean his smudgy screen with a T-Shirt sleeve, Christopher had an idea for fabric screen cleaner that slips around your iPad or Kindle cover, so you can never misplace it. He began tinkering and eventually secured a patent for his invention… calling it the iSlip.

Christopher, meanwhile, is proud to have achieved both of his boyhood dreams!