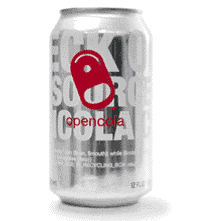 OpenCola is a brand of open source cola, where the instructions for making it are freely available and modifiable. Anybody can make the drink, and anyone can modify and improve on the recipe as long as they, too, license their recipe under the GNU General Public License.

Since recipes are, by themselves, not copyrightable, the legal basis for this is untested.

The original version 1.0 was released on 27 January 2001. Current Version is 1.1.3. Although originally intended as a promotional tool to explain free and open source software, the drink took on a life of its own and 150,000 cans were sold.

The Toronto-based company Opencola founded by Grad Conn, Cory Doctorow, and John Henson became better known for the drink than the software it was supposed to promote. Laird Brown, the company’s senior strategist, attributes its success to a widespread mistrust of big corporations and the “proprietary nature of almost everything.”

The flavoring formula for OpenCola is:

The concentrate formula is:

After mixing up the concentrate to the prescribed recipe (including all recommended safety precautions â€“ see links), the syrup is diluted 5:1 with (“preferably sodium-free”) soda water to make the finished drink; at this dilution, the above combination of ingredients will yield approximately 24 litres of OpenCola.

The full recipe also includes instructions for home-made soda water produced from basic ingredients such as yeast and sugar in order to make the entire process open source, otherwise there would be a need to use commercially-produced bottled or canned soda, or consumer carbonation machines (such as Soda Stream) with commercially manufactured carbon dioxide canisters.