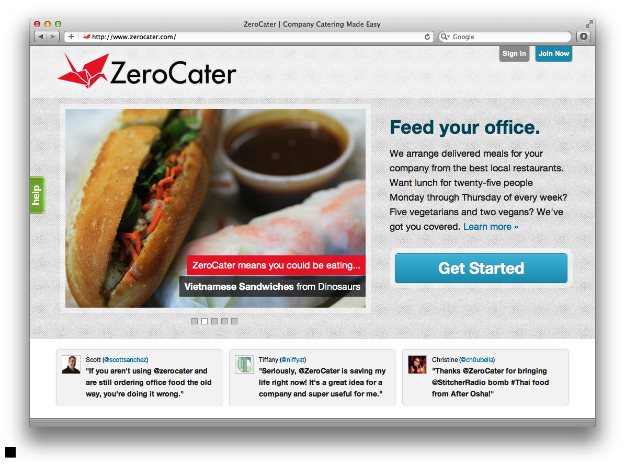 ZeroCater founder and CEO Arram Sabeti moved to the Bay Area after becoming a bit obsessed with Paul Graham’s essays. Sabeti wanted to work in startups, so he saved up some cash, got a place in the East Bay and just started looking for work. He landed at Justin.tv, where he says he handled a lot of the office management, QA and all sorts of other things that no one else wanted to do.

While at Justin.tv he handled daily lunch orders for the startup, which was routinely the most problematic part of his job. From talking to other folks in similar positions, he found out he wasn’t alone – dealing with catering was a huge pain for everyone who handle such things. So he took on another startup client and began outsourcing his expertise to Justin.tv as well.

At first, ZeroCater was just Sabeti, a bunch of hustle, and a spreadsheet with about 500 columns in it. Then he brought on CTO Bill Moorier to build some code to automate some things. Like invoicing, for instance: Prior to getting a software platform in place for managing accounts, Sabeti was spending some 20 hours a week just filing invoices for various companies he worked with. With that simplified, the business began to operate a lot more smoothly and started to grow.