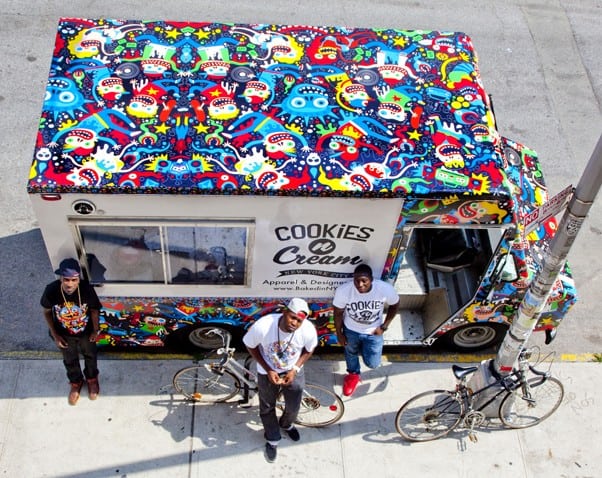 Entrepreneur reports that a new fleet of entrepreneurs are creating their own spin on the food-truck model some with seriously cool mobile retail.

On weekends, one of the hippest places to shop in SoHo In New York sits at the corner of Broadway and Prince, with street artists to the west, trendy stores all around and an endless stream of tourists and shoppers flowing past on the sidewalk.

Danceable music pulses out of speakers to stop the human stream long enough for it to notice a show window with graphic T-shirts and collectible toys on display.

And every few minutes, a passer-by becomes a patron, handing over $35 in cash for a tee and providing a smiling photo op–everyone who buys is snapped with a Canon digital camera, his/her visage to be posted on a website.

But this is no ordinary boutique: It’s on wheels, and that window is cut into the side of a converted DHL truck. Despite the name emblazoned on either side–Cookies-n-Cream–it sells nothing edible. The three entrepreneurs behind it are focusing instead on tees and toys pushed to a hip-hop soundtrack while scheming to take boutique trucks to more cities.

Already food trucks have shaken up the restaurant world, with ambitious cooks no longer confined to kitchens and committed to crippling rents and problematic locations.

Now the mobile phenomenon is entering its second phase: retail. A small group of cutting-edge entrepreneurs, often from the art and design worlds on both coasts, is skipping the brick-and-mortar boutique for highly stylized sets of wheels.