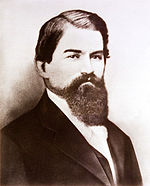 The story of John Pemberton and why he created Coca-Cola is interesting:

In April 1865, Pemberton was wounded in the Battle of Columbus, Georgia, and like many wounded veterans, he became addicted to morphine. Searching for a cure for this addiction, he began experimenting with coca and coca wines, eventually creating his own version of Vin Mariani, containing kola nut and damiana, which he called Pemberton’s French Wine Coca.

With public concern about drug addiction, depression and alcoholism among veterans, and “neurasthenia” among “highly-strung” Southern women, his medicinal concoction was advertised as being particularly beneficial for “ladies, and all those whose sedentary employment causes nervous prostration, irregularities of the stomach, bowels and kidneys, who require a nerve tonic and a pure, delightful diffusible stimulant.”

In 1886, when Atlanta and Fulton County enacted temperance legislation, Pemberton found himself forced to produce a non-alcoholic alternative to his French Wine Coca. Pemberton relied on Atlanta druggist Willis Venable to test, and help him perfect, the recipe for the beverage, which recipe he formulated by trial and error. With Venable’s assistance, Pemberton worked out a set of directions for its preparation that eventually included blending the base syrup with carbonated water, and Frank Mason Robinson came up with the name “Coca-Cola” for the alliterative sound, which was popular among other wine medicines of the time. Although the name quite clearly refers to the two main ingredients, the controversy over its cocaine content would later prompt The Coca-Cola Company to state that the name was “meaningless but fanciful.” Robinson also hand wrote the Spencerian script on the bottles and ads. Pemberton also made many health claims for his product and marketed it as “delicious, refreshing, exhilarating, invigorating” and touted it as a “valuable brain tonic” that would cure headaches, relieve exhaustion and calm nerves.