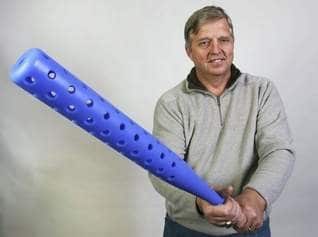 Don’t call it a bat or a toy. It’s a Water Training Device.

Dale Winger, a licensed massage therapist and personal trainer, has a patent pending on the Water Training Device. His invention is meant to strengthen muscles in the wrist, arm and shoulder, reports JCOnline.com.

He said people stand in water up to their chin and slowly swing the device, which has dozens of holes in it. The water resistance enhances muscle development.

“This is good for training to produce a proper swing in baseball, golf, tennis and bowling,” he said. “It also can be used for rehab after an injury.”

He first developed the Water Training Device to strengthen his wrists “to do a better job” as a therapist.

Winger showed his device last week during a trade show at the Major League Baseball winter meetings in Indianapolis.