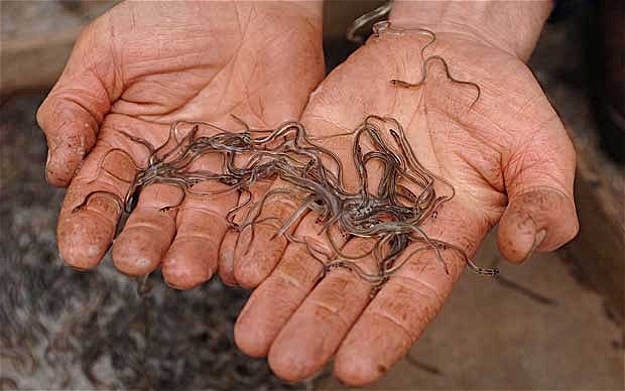 The next two months will bring sleepless nights and high anxiety â€” and quite possibly an extraordinary windfall â€” for a small universe of people in Maine. They are the lucky few with licenses to catch elvers â€” young, tiny eels that look like cellophane noodles and by some accounts are fetching up to $2,200 per pound this spring.

Elvers are a hot commodity in Asia, where aquaculture farms grow them to adult size and sell them for sushi and other food. They are believed to spawn in the Sargasso Sea and drift on currents to Maine, where they make their way to fresh water and, from March 22 through May 31, into the waiting nets of some 400 elver fishermen. The action takes place overnight, when elvers are most active.

Maine is one of only two states, along with South Carolina, where elver fishing is still allowed. And with Asian demand especially high â€” last yearâ€™s tsunami curbed supply in Japan, and Europe has cracked down on exporting eels â€” a gold rush of sorts is on along the rivers and streams of coastal Maine. Since the season began last week, stories have abounded of people making a small fortune in an often hard-luck state.