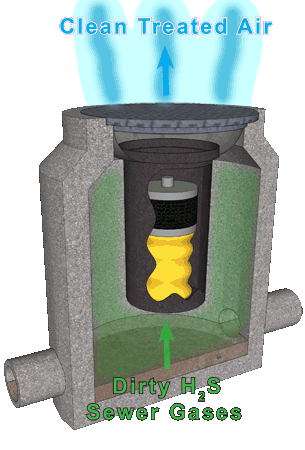 The 38-year-old Modesto resident said the idea came from a need he saw across the country because of an increase in low-flow toilets and water efficiency programs. Reducing the water used in municipal systems also lessens the ability to flush out stinky pipes â€¦ which then causes a buildup in hydrogen sulfide gas, which causes an unpleasant rotten egg smell.

Cities combat the problem with expensive chemical treatment and simple carbon inserts. Paoluccio said what makes his filter different is a two-part bladder system that collects the peak gases and only filters them when needed, thus greatly extending the filter’s life and saving on expensive carbon inserts.

The result, he said, is a filter that lasts at least a year and three to five times longer than existing models.

Paoluccio’s hope is to sell the product, which runs $500 to $750 apiece, to municipalities to put on problem odor areas. He has marketed it to casinos, amusement parks and golf courses. The replacement filters cost $100.