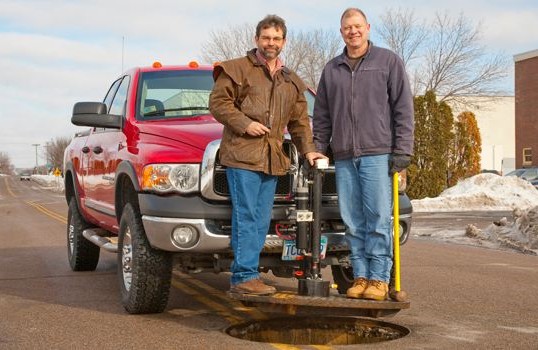 According to Bloomberg Businessweek, opening manhole covers, which weigh up to 400 lbs., is difficult at best and dangerous at worst.

Dave Roberts, 51, who spent 25 years lifting them while working for waste-water authorities in Minnesota’s Twin Cities, decided to find a better way.

A perpetual tinkerer, Roberts designed a machine to remove the heavy cast-iron lids using a powerful magnet and a hydraulic hoist that attaches to a back of a vehicle. He assembled the first device in his garage five years ago and sold seven of them to his employer.

Roberts quit his job in 2005 and financed the business with more than $100,000 borrowed against his house and from credit cards.

Last October, he and business partner Rick Carlson, 53, relocated to Rock Valley, Iowa, after economic developers there connected them with a group of 12 local investors who invested an undisclosed amount in the company, which they renamed Rock Mills Enterprises.

Roberts and Carlson pitch their tool as a way to save time and reduce the risk of injury to workers, and they see a vast market for the product in municipalities, utility companies, and institutions like military bases and universities.