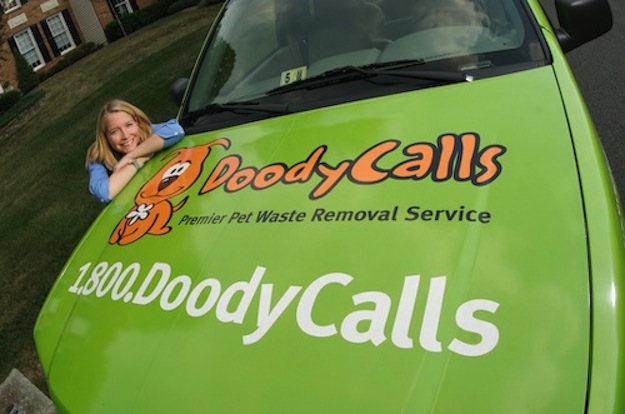 Jacob D’Aniello, co-founder and chief executive officer of DoodyCalls, can imagine only one scenario in which his business could fail. “If one day, everybody in the world woke up and decided they loved picking up dog poop,” he says grimly. “If it suddenly became everybody’s favorite recreational activity, that would be a terrible day for us.”

Luckily for D’Aniello and his company, which just celebrated its 13th anniversary, the world’s feelings about animal feces probably won’t be changing any time soon. People love their dogs almost as much as they hate the smelly gifts they leave behind. But for just $15 per week per dog, DoodyCalls will come to your home, apartment, community, or place of business and eliminate any evidence that a canine used it as a personal bathroom. “Our customers aren’t lazy,” D’Aniello stresses. “They’re just upwardly mobile.” He compares his service to pre-made spaghetti sauce. “You could make your own,” he says. “But you don’t.”

Where’s the idea for Doody Calls come from?

Commuting home from work one evening in late 1999, Jacob D’Aniello was listening to a popular radio talk show that brings low-brow humor to the masses, when on came an interview with some wack-job who’s all evangelical about his wonderful career picking up dog poop.

Jacob almost changed the channel, but then realized that the guy actually loved his job, earned a good living (claimed, in fact, to be making more than D’Aniello was earning at the time), worked his own hours, said his clients loved him, and didn’t have to commute anymore. Granted, it wasn’t rocket science or brain surgery, but it got him thinking.