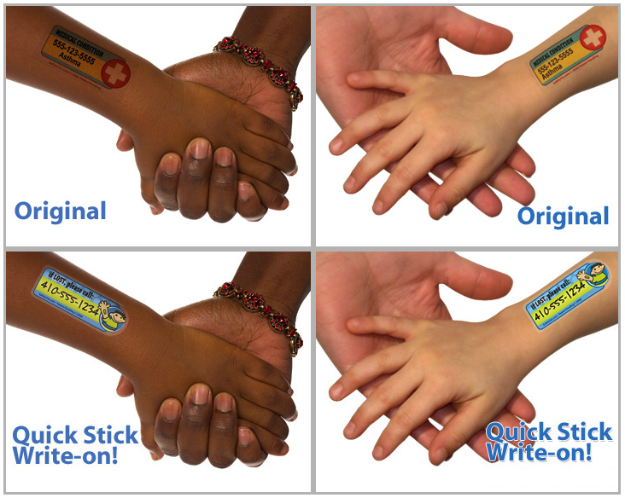 If you have you ever lost your child, even for a moment, you know that it is every parentâ€™s worst nightmare.

Here’s a product to make you feel better about that eventuality: SafetyTats are temporary child identification tattoos that when applied to a child’s arm provide an immediate and highly visible form of identification and contact should your child become lost. Unlike just writing your telephone number of your child’s arm, the temporary tattoo is waterproof.

Where’d the idea come from?

The idea for SafetyTat temporary child ID tattoos was born of necessity one weekend at an amusement park. On Labor Day Weekend, Baltimore Mom, Michele Welsh and her husband, there with their three small children, felt out-numbered. To stave her panic, she quickly wrote her mobile phone number on each of their arms with a ballpoint pen. As she did this, she thoughtfully explained to each of them the importance of staying close to Mommy and Daddy. She also told them that if they were separated that the number on their arm was a way to reconnect with them.

Throughout the day of fun, Michele had to rewrite the number several times as it smeared or washed off. Several parents in the park stopped her to ask if that was her number on the kids’ arms. Each time, they loved the idea.

The day was a success and the idea for SafetyTat temporary child id tattoos was born.