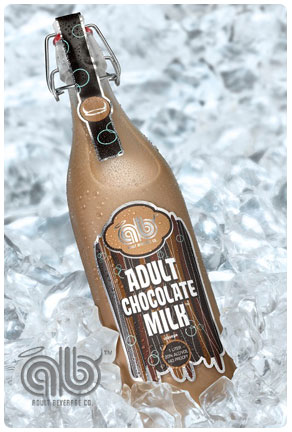 From the start, Reinhardt and Halbur’s drink was a hit–before it was ever officially bottled. Through some of Reinhardt’s connections, she and Halbur were invited to bring Adult Chocolate Milk to a breast cancer benefit party at a pre-Emmy luncheon at the home of Adrienne Maloof (of Bravo’s Real Housewives of Beverly Hills fame). The two got to work fast, incorporating in 48 hours, putting together a logo and printing business cards. They bought the ingredients they would need, mixed the drink in Maloof’s kitchen, served it with little red straws and passed it out at their ACM booth.

“When you looked out that day, there was just a sea of red straws–everyone’s talking about it, people are stopping by our booth saying, â€˜You’re the chocolate milk people!’ It spread like wildfire,” Halbur says. “We knew then that we were on to something.”

Since what Reinhardt had originally created was made from products already on the market, the ACM recipe had to essentially be re-created. “We had to reverse engineer it. We had to make a shelf-stable version not made with milk, not refrigerated,” Halbur says, which was also important because both moms wanted a drink that could be kept separate from real chocolate milk and the little hands that reach for it.

What they came up with was a 40-proof blend of vodka and chocolate and cream flavors that stays good on the shelf for up to a year. But it took 16 rounds of testing to get the flavor just right.