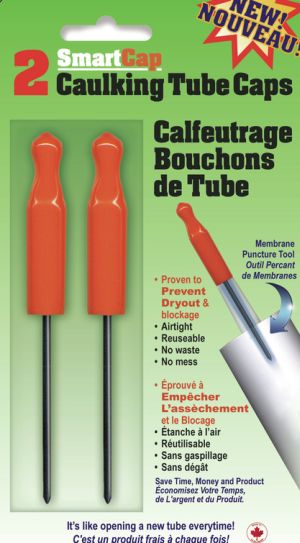 If you’ve ever had to use caulking at one time, you’re probably familiar with how easily it dries up within the tube. Sean DubÃ© also noticed the problem, but he decided to create a solution. It is called SmartCap. By October, his invention will be in over 500 stores across Canada.

SmartCap is a small, reusable cap that prevents tubes of caulking from drying out.

DubÃ© also recently acquired a patent on the product and said heâ€™s working on getting a trademark on the name.

This is DubÃ©â€™s first invention.

â€œIt feels great to start off with absolutely nothing of a product … and get to the point of marketing, packaging and seeing it in the stores,â€ he said.

DubÃ© said the invention of the product has not cost him a lot of money, only the tubes of caulking and material for SmartCap.

He said the most â€œchallengingâ€ part of the process was testing the product in its early stages to see how long the tube of caulking would remain usable. So far, heâ€™s had a tube of caulking, capped with SmartCap, for 30 months and the caulking still flows freely from the tube.