Don’t hire this clown if your children have coulrophobia (the irrational fear of clowns):

He posts notes warning children they are being watched, telling them they will be attacked.

But Deville is not an escaped lunatic or some demonic monster.

He is a birthday treat, hired by mum and dad, and the â€˜attackâ€™ involves being splatted in the face with a cake.

â€˜The child feels more and more that it is being pursued,â€™ said Deville.

â€˜The clownâ€™s one and only aim is to smash a cake into the face of his victim, when they least expect it, during the course of seven days.â€™

If the boy or girl manages to avoid the â€˜hitâ€™, they are given the cake as a birthday present. Well, thatâ€™s alright then.

The frightening fun can be stopped at any time, which is handy for parents who have second thoughts and donâ€™t fancy the cost of child therapy.

Just in case you frighten easily, I’ve included the photo after the jump and not before. 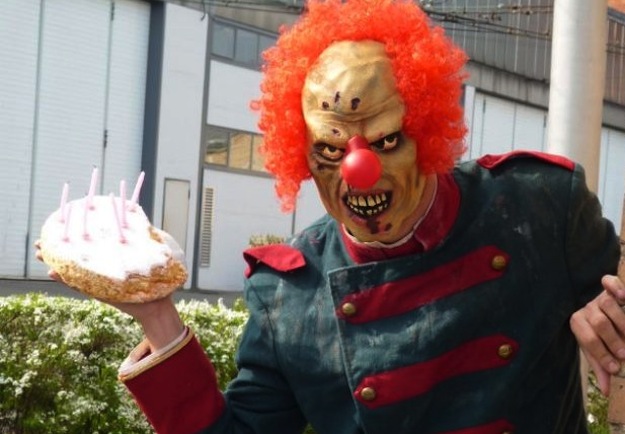