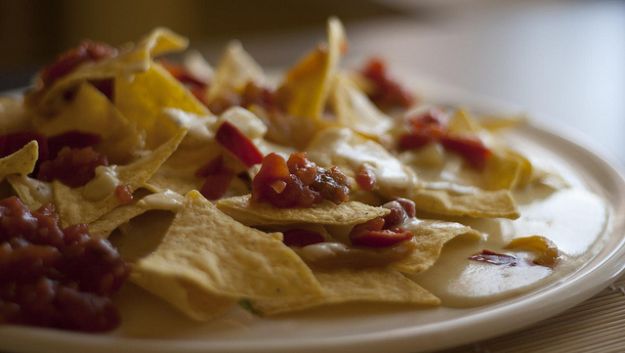 During World War II, wives of American military officers who lived at the Eagle Pass. Texas. base would often venture over the Rio Grande River to the nearby Mexican town of Piedras Negras. On one of these excursions, a group of women stopped at the Victory Club, a popular restaurant, for a bite to eat. And while happy to receive business, the maitre d’ who greeted the women, Ignacio Anaya, found himself in a bit of a predicament:

He couldnâ€™t locate the cook. Not wanting to turn away the patrons, he put on his chefâ€™s hat. He looked around the kitchen and threw together what he had, which according to “The Oxford Companion to American Food and Drink” consisted of neat canapes of tortilla chips, cheese, and jalapeno peppers.”

Ignacio was often called Nacho for short, and the dish was named after him. Nachos continued to gain popularity for the next 20 years, but really took off thanks to a man by the name of Frank Liberto, who began to sell them as stadium food at Arlington Stadium (home of baseballâ€™s Texas Rangers at the time). Liberto made one major tweak to Anaya’s nachos:

…because real cheese didnâ€™t have a great shelf life (and melting it would require an oven or broiler), Liberto devised a fast food form of Anayaâ€™s masterpiece that was part cheese and part secret ingredients. The new sauce didnâ€™t need to be heated and, when it came to shelf life, it could likely survive a nuclear blast.

And so the nacho was born, with a missing chef to thank for it.