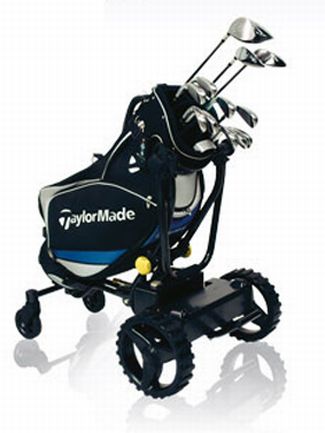 I prefer to walk, and know a lot of other people who prefer to walk,â€™â€™ said Lee, an avid golfer who is chief executive and chief designer at Wakefield-based FTR Systems Inc., which this week launched the CaddyTrek – an electronic caddy built with robotic technology – at the PGA Expo in Las Vegas.

â€œI still carry my own bag, but it becomes a chore,â€™â€™ said Lee, who lives in Lynnfield. â€œSo, I thought that maybe a cart following you will be a good idea. I know thereâ€™s one company in Australia that has a follow-you cart, but itâ€™s huge. Itâ€™s about half the size of a riding cart. I wanted to do one that was affordable and compact, so you can put it into your trunk and go anywhere you want. We started with an idea to build a cart the size of airline carry-on luggage. Weâ€™re probably a little over that at this point, but itâ€™s still small enough and light enough to fit in your trunk. Not on an airline, but you could check it in.â€™â€™

While creating the CaddyTrek, Lee also built a better version of the electronic golf bag trolleys/caddies on the market. Using a device clipped to the golferâ€™s belt, CaddyTrek follows the golfer at his or her walking pace, starting and stopping when the golfer does, and – in the words of the product website – allows the golfer to â€œwalk the course relaxed and totally focus yourself on the game.â€™â€™ Sensors keep it from bumping into trees or other obstructions, and a remote control can be used to bring the caddy closer when itâ€™s time to pull out a club.