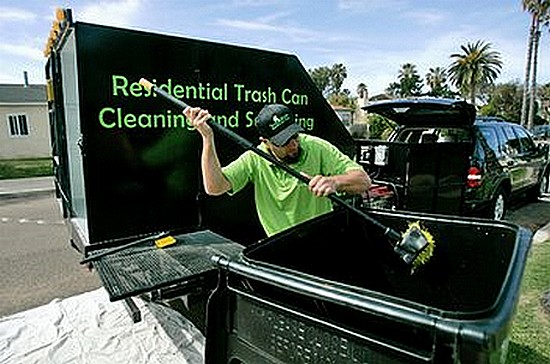 But trash cans are supposed to be dirty.

That’s what entrepreneur Warren Bishop hears nearly every time he explains how his fledgling, Point Loma-based trash-can-cleaning company turns filthy, germ-filled waste bins on wheels into sanitized receptacles, according to a story in the San Diego Union-Tribune.

“Flies lay eggs in there on food and animal feces, then they go into your house and land on your utensils and food. It’s disgusting,” Bishop said. “There’s E. coli, fungi, bacteria. Spiders like black widows make their home under the edges.”

Bishop thinks he has hit upon an idea with gross potential. So far he has no local competition, and in less than a month Scrubbish Wheelie Bin Cleaning & Sanitizing has gone from a handful of customers to about 150 and counting around the region.

Mobile wheeled-bin cleaning began in England, said Bishop, a native of Australia who uses the Aussie-British term “wheelie bins” to describe rolling residential trash cans. But it’s also big in Australia. Bishop said he first heard of the service during a visit back home, where curb-to-curb cleaning of plastic trash cans has become quite competitive.

One at a time, bins are sprayed with a biodegradable degreaser and sanitizer. They are loaded into a special vehicle, where a pressure washer set at 1,500 pounds per square inch rips off everything from cat litter to pepperoni pizza. For the more disgustingly dirty bins, brushes and scrapers are used. Finally, bins are dried and sprayed with a deodorizer.

Bishop touts his service as being environmentally friendly. About a half-gallon of water is used per cleaning, and the runoff is collected and treated before being released into the sewer system.