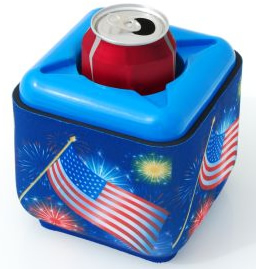 One morning George Wood awoke to find that he had left out a freeze gel pack on the counter. However, he did not expect to find it still cold.

George had spent that last 40 years complaining about his bedtime glass of water. It would be cold when he set it on his nightstand, but it was always warm by morning. According to TCPalm, the morning that he found the still cold freeze gel pack on the counter was the morning he finally felt inspired to fix his problem.

“All of a sudden, bam, it hit me how to do it,” the first-time inventor said. “I went down to Walmart and bought a bunch of freeze-gel packets.”

Wood wrapped them around a can, secured the bundle with duct tape and froze it. Its center stayed at 38 degrees all day long, and the Freeze ‘N’ Go was born.

“Basically, it is a 5-inch cube with a hole in the center that will hold your can or water bottle,” said Wood, 60, who has patented his invention. “We’re putting them in some stores right now.”

They also are available online, and Wood said about 300 have sold. Another 300 were given away to get them into people’s hands as promotions.

Wood is working toward automating production with a mold. East Coast Plastics in Port St. Lucie has been chemically welding two pieces together to make the devices.

The change will cost Wood and his investor partner, Paul Boucher, $100,000, but will help bring down the retail price, which is about $24.