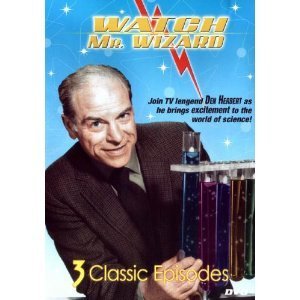 Donald Jeffry Herbert (“Mr. Wizard”) (1917 â€“ 2007) was the creator and host of Watch Mr. Wizard (1951â€“65, 1971â€“72) and of Mr. Wizard’s World (1983â€“90), which were educational television programs for children devoted to science and technology. He also produced many short video programs about science and authored several popular books about science for children. In his obituary, Bill Nye wrote, “Herbert’s techniques and performances helped create the United States’ first generation of homegrown rocket scientists just in time to respond to Sputnik. He sent us to the moon. He changed the world.”

If you’d like your kids to experience the science show of your youth, you can watch a number of different Mr. Wizard videos on YouTube or, you can pick up this DVD from Amazon.