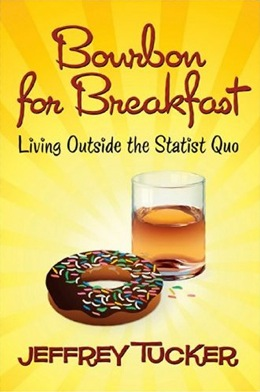 If you enjoyed my previous post, Washington Makes You Dirtier, you’ll love a book from Jeffrey Tucker called Bourbon for Breakfast: Living Outside the Statist Quo. The book is about how the government makes everything it touches worse. Its pervasive interventions in every sector affect the functioning of society in so many ways that we just adapt. Tucker proposes another path: see how government has distorted daily life, rethink how things would work without the state, and fight against the intervention in every way that is permitted.

The book is also available completely free to download as a PDF.

The following is an excerpt from the introduction to Bourbon for Breakfast: Living Outside the Statist Quo by Jeffrey Tucker.

The title of this book is drawn from one of those defining moments in life in which a small phrase shatters the social-cultural convention and reveals completely new possibilities. I tell the story herein in the essay on morning drinking.

A great scholar and Southern gentlemen-a man who has written the ultimate guidebook to the writing of the King James version of the Gospels-invited me for an early breakfast, 7:00 a.m. and then offered me coffee.

He then added: “would you like bourbon in that coffee?”

What is revealed in that sentence and the shock it elicited? We believe, for whatever reason, that drinking hard liquor in the morning is unseemly, contrary to social norms, something to hide, a habit of the lower classes that is dangerous or even evil.

But are any of these assumptions true? A new form of prohibitionism has swept the country, imposed on us by our government masters and their cultural backers, even as alcohol consumption rises and rises. Evidently, we live two realities: the one the government imposes on us and the one we adopt in our real lives.

What struck me about this man’s phrase was how it presumed that he and I were among the rebels against the prevailing ethos-that together we would reject the government’s edicts and create our own norms and reality. This is a wonderful model for living a full life. This book is about seeing that just because government mandates certain things and forbids others does not mean that we must follow or even tolerate the official roadmap for our lives.

The seed of truth to the morning-drinking taboo is that doing this every morning would contribute to a less productive life. But on the weekends or when it is not necessary to be at your sober best, or when you are celebrating some special guest, there is surely nothing wrong here.

In any case, there must be some lost aristocratic tradition of adding a splash, else this highly cultivated, highly educated and scholarly Southern gentleman would not have suggested it. In doing so, he was revealing some lost history with a sense of freedom and possibility. To contemplate the suggestion is to imagine a world that does not exist, one that breaks from the status quo and plays with the pluses and minuses of adopting a new way of living.

Most of the essays in this book do just this. They imagine radical new possibilities of living outside the status quo. Or perhaps we should say “statist” quo because it is the state that is responsible for shaping our world, in brazen ways and also subtle ones that we do not fully realize.

Examples from the book include how and why the “hot” water in our homes became lukewarm and what can be done about it, how our toilets stopped working properly because of legislation that reduced toilet-tank size, how traffic-law enforcement became a racket for extracting wealth from the population to feed the overlords, how copyright and patent legislation is depriving us of cultural and technological innovation, and how politicians who we think are protecting us are really just taking away our own rights to protect ourselves.

To see the costs of statism is to see what Frederic Bastiat called the “unseen.” It is about imagining the existence of some possibility that the state has forbidden from existing, playing with that possibility in your mind, and then acting on what has previously been an abstraction and making it a reality. Art helps us accomplish this mental feat, which is why many of these essays deal with literature, movies, culture, and the arts.

But seeing what is wrong with the world-Chesterton’s phrase-is only the beginning. Finding the solution, the workaround, is the next necessary step. I try not to highlight problems without also offering a solution of sorts, simply because there is nothing productive or enlightening about despair. Hope comes from imaging a better future that does not yet exist.

Most of the essays in here deal with what are often considered trivial or light topics. But the trivial is quite often very serious, while what we think is serious is often quite trivial, as I try to show. At the same time, I deal with topics that libertarians of my stripe don’t often write about, like the ghastly reality of jail (yes, the article is autobiographical) and the problems connected with intellectual property. I make no apology for the fact that the topics are all over the map. Maybe that will make this book more interesting.

Jeffrey Tucker is the editor of Mises.org.