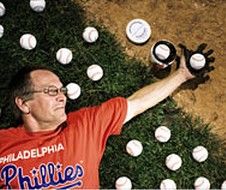 Jim Bintliff supplies special mud for Major League Baseball. The story goes back to when pro baseball teams began using new balls for each game. They wanted to remove the factory gloss and make the balls easier to grip. The umpires tried in-field dirt, shoe polish, and tobacco juice, but everything damaged the ball.

Lena Blackburne, a Philadelphia Athletics coach, remembered the rich mud at his fishing hole in southern New Jersey near the Delaware River. He started experimenting with the mud, mixing it with varying amounts of water to try to achieve a consistency that was thick enough to adhere to the ball yet didn’t gum up the laces. In 1938, Blackburne eventually delivered a batch to the Athletics, whose chief umpire at the time liked it.

American League opponents found out about the mud and asked where they could buy some. The National League followed. Blackburne, who didn’t have kids, left the business to my grandfather, his childhood friend. My grandfather gave the business to my father, and today I run the company with my wife, Joanne. In a good year we make about $22,000 a year selling mud – I earn my living as a night-shift printing-press operator.

Every MLB team buys the stuff, which we ship in plastic three-pound containers. Umpires used to be the only folks who could apply the mud to balls, but today the job falls to clubhouse managers. The league doesn’t officially endorse the product but says it’s the only substance that works. It’s also about tradition – essentially the MLB wants today’s players to apply the same mud that Ted Williams used.

The mud is on public land, but we’ve always kept the location a secret to keep people from trampling it. I make about five or six trips to the mud hole a year. When I get the mud to my house, I rinse it with tap water and filter out debris. I’d like to expand the business. Recently I sold a few buckets to a few NFL teams, which have found that the mud makes footballs easier to grip. We’re hoping to hear from more of them.