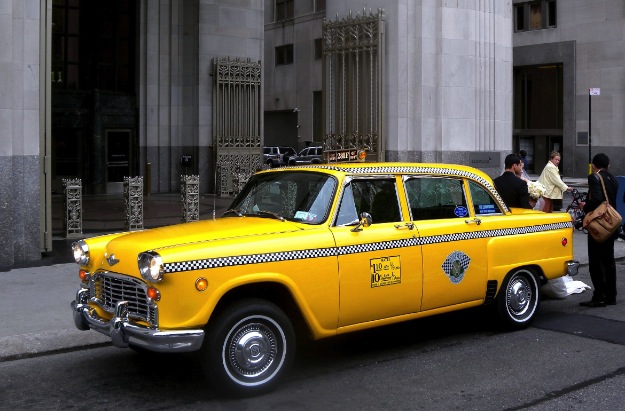 On this day in 1923 the first Checker Taxi hit the streets. The Checker Taxi is the most famous taxi in the United States.

It’s history is below.

Morris Markin, (a clothier from Chicago, Illinois) became the owner of ‘Markin Automobile Body’, an auto-body manufacturer based in Joliet, Illinois following a default by the owner on a $15,000 personal loan. The facility made bodies for ‘Commonwealth Motors’ who marketed the vehicles to cab companies under the trade name ‘Mogul’.

Inspired by John Hertz who had set up a taxi business in Chicago (later known as Yellow Cab Company) in 1910, Markin began buying up Checker Taxis’ vehicles in 1924, gaining full control of the company in 1937. Markin followed Hertz’s business plan in having drivers open doors for the fares, and outfitted each driver with a uniform.

Competition for fares was fierce in the 1920s, and the easily spotted drivers began ganging up on one another between fares. The fighting between the two cab companies escalated to the point where Markin’s home was firebombed which prompted Markin to relocate Checker Taxi to Kalamazoo, Michigan. Checker became the first cab company to hire African-American drivers and the first to require that drivers pick up all fares, not just white ones.

Hertz had sold his Yellow Cab to the Parmalee Transportation Company, but in 1929, after a suspicious fire at his stables killed his prized race horses, Hertz sold his share to Markin who then acquiring another one-third in the company from Parmalee, thus taking control of both Parmalee and Yellow Cab.

When Hertz had sold off the cab business, the manufacturing arm went to General Motors, which wanted to sell part of the acquired business and made an offer to Markin, but Markin refused. Rather than eliminate the capacity of Yellow Manufacturing, General Motors entered the taxicab business as Terminal Taxi Cab.

A second fare war broke out, with Checker Taxi Co and Terminal Taxi Co staff fighting it out in New York City. To end the dispute, New York Mayor Jimmy Walker created the New York Taxi Cab Commission, which ruled that all cabs in New York had to be purpose-built cabs, not consumer car conversions.

Markin sold Checker Cab to E.L. Cord, but bought it back again in 1936.

In 1940, Parmalee (including Yellow and Checker Cab) became the largest cab company in the United States.

From its inception until 1956, Checker taxicabs had unusual and sometimes bulky, styling. A brand-new body was introduced for the 1956 model year, called A8, and that body would be retained for the duration of Checker production until the end, in 1982.

Aside from the body, components for the A8 and subsequent models were sourced from various manufacturers. Studebaker parts were used in the interior, suspensions came from Ford, engines were built by Continental, and the automatic transmissions were originally Bendix units.

Starting in 1959, Checker began producing passenger car versions of the taxis to the general public. Called Marathon for most of its life, the Checker car was advertised as a roomy and rugged alternative to the standard American passenger sedan. A Marathon station wagon was also offered, but American buyers preferred style and power over practicality, so the high-riding bulbous Checkers never sold well to the public.

In 1964 the State of New York pursued Markin and Checker on antitrust charges, alleging that it controlled both the taxi service and manufacture of taxis, and thus favored itself in fulfilling orders. Rather than allow Checker drivers to begin buying different brands of cars, Markin began selling licenses in New York City.

As Federal safety rules increased throughout the 1960s and 1970s, Checkers kept pace and despite having the same basic body design, Checker enthusiasts can often identify the year of a Checker based on its safety equipment. For example, starting in 1963, amber parking/directional lights were used up front. 1964 models introduced lap belts in front, energy-absorbing steering columns came in 1967. 1968 models featured round side marker lights on fenders along with shoulder belts, and 1969s introduced headrests for front outboard seating positions.

Despite its bare-bones reputation as a taxicab, ultra-luxury, limousine-type Marathons were also available, especially in later years. The A-12E model, specially built for the wife of the CEO of the company, remains in brand-new condition with less than 50 miles on the odometer. Checker limos offered vinyl roofs with opera windows, power-assisted accessories, and luxurious upholstery.

The final Marathon was manufactured in 1982, when Checker exited the automobile manufacturing business. The company continued operation at partial capacity making Cadillac parts for General Motors until January 2009 when it declared bankruptcy