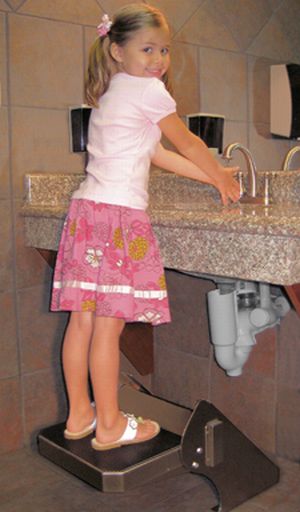 Joi Sumpton always wanted to be an inventor, but the opportunity never seemed to arise. According to her article in Fox Business, the opportunity finally appeared while she was trying to help her child wash his hands in the bathroom. They had diaper changing tables and other tools to help kids, but there was nothing to help them step up to the sink and wash their hands. Joi began to think about the problem, and a solution began to emerge.

With the provisional patent filed in January 2006, it was time to create the product. One night while doing research on the internet, I came across a newspaper article about a guy in Atlanta who had invented a car carrier for motorized scooters. In the article he said his success wouldn’t have been possible without his product design engineer, John Evans. I called the inventor the next day and asked for Evans’ contact information, which he was happy to provide. The day I met Evans is the day that changed my life forever. He took my idea and original design and transformed it into a work of art.Step ‘n Wash was born.

Once Evans finalized the design, we created a prototype to test functionality and strength. We tweaked the design several times, and each time we had to make a new prototype and test everything again. It took three years to perfect the spring mechanism to retract the step.

If you have an idea, never assume that it has already been done. Who would have imagined that out of the tens of millions of mothers who came before me, no one had invented a retractable step for children to use in public restrooms?

Step ‘n Wash is a profitable business, with sales for 2010 up 300 percent over the previous year and almost 200 new customers on the books this year. The more than 5 million public restrooms in America offer our company a tremendous growth opportunity.