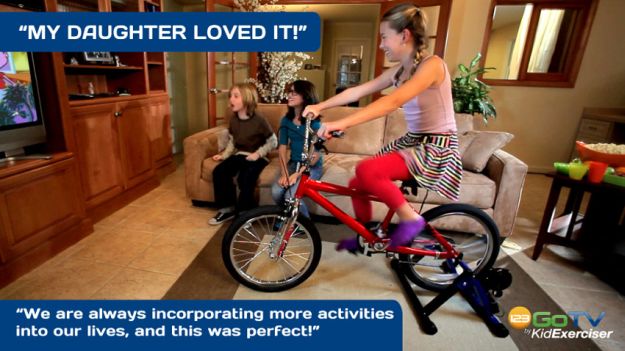 The next time your child asks to watch TV, make them pedal their way through it with the 123GoTV. This unique device, when hooked up to the television, makes it so kids must pedal their bicycle to keep it turned on.

When a bicycle is hooked up to the 123GoTV and a television it becomes a stationary exercise machine. A kid parks himself or herself on the bike seat, turns on the television and starts pedaling.

As long as the bike’s rear wheel keeps spinning the television stays on. When the wheel stops the screen goes blank.

“It just rewards TV time so kids aren’t couch potatoes. That was the original intent,” said Mullen, 65. “It will even work for a kid who doesn’t have a lot of leg power. There is no threshold you have to achieve and a really creative kid could sit on the floor and pedal with his hands.”

Mullen’s idea dates back about 10 years, when her son Eddie was 6 years old and liked to veg out on the couch and watch television.

Forcing exercise on her child wasn’t an option so Mullen began mulling over various ways to get kids working out a bit while watching their favorite programs.

Mullen invested about $200,000 into the business that she named KidExerciser and operates out of her garage. She developed the GoTV with assistance from consultants, technical experts and engineers. The first one was delivered last May.