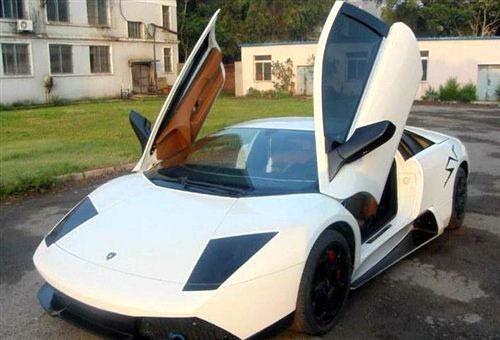 What you get is what you see… and less. The DIY “Shanzai” (imitation) Lambo is based on a second-generation Toyota MR2, a mid-engine automobile made from 1989 through 1999.

The model W20 MR2 displays a noticeable resemblance to the Ferrari 348 and the Ferrari F355, so much so that it acquired the nickname â€œpoor man’s Ferrariâ€ and aftermarket suppliers produced kits designed to enhance the resemblance. It may be that the unnamed Chinese craftsman who came into possession of an otherwise unremarkable red MR2 was inspired after seeing one or more of these automotive cosmetic surgeries.

Cosmetic is the word: the LP640’s body is built on the original MR2’s chassis and is powered by the original 175 hp engine. The builder mentions the addition of stainless steel, steel pipe and steel plate in the driver and passenger side doors. He also states the car’s symbol plaque, glass, grille, tail lights and exterior accessions are â€œall original factory partsâ€… if these are made in China for Lamborghini, that makes perfect sense.