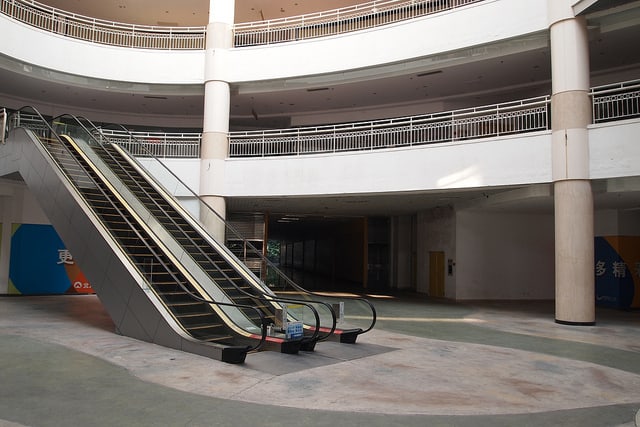 The Globe and Mail:

When the New South China Mall opened to great fanfare in 2006, it immediately became the worldâ€™s largest shopping centre by floor space, knocking the West Edmonton Mall into second place. Newsweek magazine believed it to be one of the seven â€œnew wonders of the world,â€ visitors are reminded in a video that plays on an endless loop over one of the mallâ€™s many entrances.

The 2.1 kilometres of Venice-style canals that wind through the mallâ€™s heart are lined with stores that closed soon after the splashy opening. Advertisements promising â€œFashion 2006!â€ hang beside naked mannequins in one deserted clothing shop. Long rows of stalls never even saw a tenant. A half-dozen gondolas that were supposed to transport tired shoppers from one wing of the giant mall to the next bob unused beneath the mallâ€™s stone â€œSan Francisco Bridge,â€ the gondoliers nowhere in sight.

In several hours of wandering the mallâ€™s vast acreage on a Saturday afternoon, only a handful of shoppers could be seen.