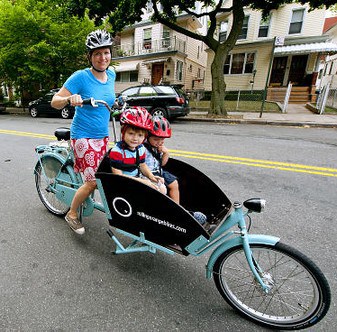 According to The New York Daily News, a big-bucks bicycle is turning heads – as well as corners – on the city’s streets.

Wacky-looking box bikes, with room for the kids, groceries and laundry, are proving a wheel hit with families eager for a healthy alternative to the car.

“So far, it’s been spectacular,” said Mary Brosnan, 36, of Kensington, Brooklyn, who bought one of the bikes over the summer to ride with her two young sons. “I wanted to find a way to get some exercise and make it fun and interesting for them. This was instead of a gym membership.”

The bikes, which come in different shapes and sizes, stand out due to the roomy cargo areas attached to their frames.

The $2,650 price tag is more than Brosnan spent on her first car – but she decided it was a price worth paying.

“You don’t need a car with a bike like this. Most people live their lives within 10 miles of their home, and it’s all you need,” she said.

European-style bicycles have been making inroads in the U.S. in recent years, with box bikes the latest example.

His business supplies them to eight stores across the country, with three in New York, including Rolling Orange.

Photo by Marino for News.