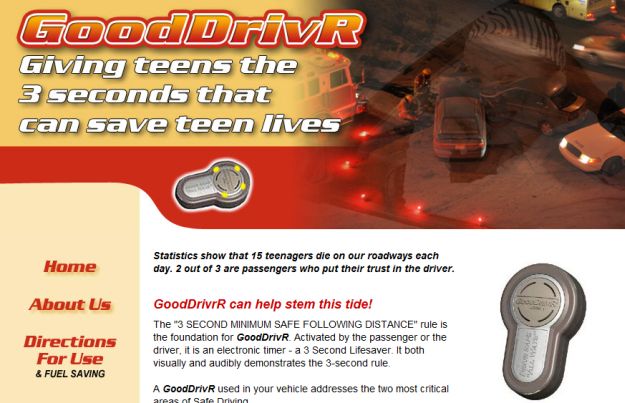 What is that rule? Is is the theory that there needs to be a three second following distance between vehicles. You are putting yourself and your passengers at risk for an accident if you follow any closer. At least, that is the theory used with Don Jurgich’s new invention: GoodDrivR. According to KitsapSun, his device can help passengers remind the driver to keep a safe distance.

Called the “GoodDrivR,” the tool is a small, hand-held device that can help drivers –especially inexperienced teens – time themselves for the 200-yard (or three-second) “minimum safe following distance” rule. By allowing this minimum spacing, the driver can both see the vehicle being followed and view the 200 yards ahead, being able to better anticipate and avoid possible deadly hazards, Jurgich says.

“It’s a simple but accurate three-second timing device that will visibly and audibly demonstrate to all passengers (and the driver) in the vehicle what the minimum safe following distance is,” he says. “… Drivers always think they’re driving perfectly, but passengers are more likely to be injured or killed so passengers can trigger the device … and not be bashful to exercise some control over their destiny.”

The GoodDrivR, he says, is efficient because it can help the driver focus on the road. It works by timing three seconds after the button is pushed – so when following a car, the button can be pushed when the car in front passes a landmark like a tree, shadow or pole, and if you get there before the device goes off, it means you’re following too close. Jurgich says the device can also be activated as a way of cooling off when there are other distractions in the vehicle, and it’s more likely to get the driver to pay attention because it eliminates that more offensive method of telling the driver what to or not to do.

“I keep one on my dash and if I’m not focused, my wife can activate it and it brings me back,” he says.