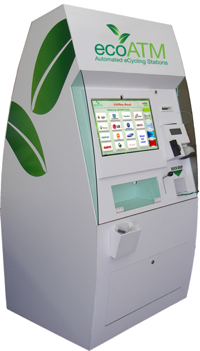 Cash for high-tech trash. Thatâ€™s the basic concept for the recycling kiosk from ecoATM. You drop off old electronics at one of these machines; it calculates their value, then pays you on the spot, in cash or coupons. The company says its secret sauce is the kiosksâ€™ ability to automatically estimate â€” using electronic and visual techniques â€” a price of the unwanted items that will give consumers an immediate financial incentive to recycle at the station.

As of the middle of last year, the three-year old company had built a network of 50 buyers around the globe that take the used consumer electronics devices ecoATM collects from its kiosks (from mobile phones to iPods to MP3 players to game cartridges) and recycles the components. ecoATM says it finds the best price for the devices, then passes a portion of that revenue onto its customers.

Promotional video after the jump.