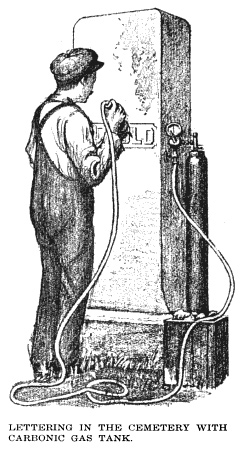 Although 40% of American chose to be cremated when they die (and the number continues to grow), there is still a substantial gravestone business. The Atlantic has put together an incredibly interesting profile of the different businesses and their technology in the headstone biz.

The industry’s pace of change has accelerated, and especially for this set of companies, it’s hard to keep up. For hundreds of years, the memorial industry only had to keep one time: almost eternity. They dealt in granite and worked headstones by hand. Two lines of text could take an hour to chisel into stone! But the slowness didn’t matter relative to the length of time a grave marker would remain. Cemeteries are our most conservative civic place. Nearly every company that makes monuments advertises its triple-digit age.

But no industry remains untouched by the times. Changes in power and transportation changed the monument business over the decades. Jessie Lie Farber, co-creator of The Farber Gravestone Collection, breaks up American burial practice into a few different eras. In the 17th and early 18th-centuries, gravestones were made from just about any stone that could have been “brought by wagon from the nearest quarry.” Later in the 19th century, transportation improved and marble began to be favored.

Then, as the 19th century melted into the 20th, pneumatic chisels made it possible to create memorials out of granite, a more durable stone than marble. At the mine level, compressed-air tools made it easier to quarry the granites of Barre, Vermont and Elberton, Georgia, two places that remain the two-chambered heart of the domestic granite industry. and sandblasters powered by air compressors and rubber stencils made it possible to create new designs. The Monument Dealer’s Manual from 1920 is filled with new tools and techniques.