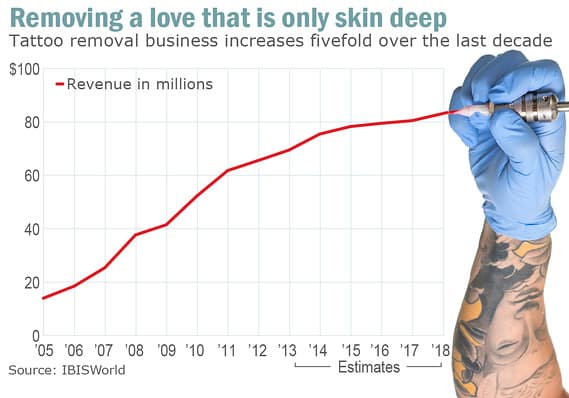 The tattoo removal industry is still growing and expected to hit $83.2 million over the next four years.

Most tattoo removals are performed on people in their 30s and 40s, says Michael Kulick, a San Francisco-based plastic surgeon. “What was attractive in your 20s is not so attractive in your 30s,” he says. Costs vary from $500 up, depending on the color and depth of the ink in the skin. The ideal color for removal is black because that tattoo will be at the same depth in the skin and the same wavelength for the laser to remove the ink. “Now it’s very fashionable to have pastels and yellow, which is very difficult to remove,” he says.

Relationship breakups and job-hunting has led to a surge in tattoo removals, Brennan says. “Increased social acceptability of and interest in tattoos has driven demand for them, which ultimately increased the pool of potential customers who may regret their initial decision and want their tattoos removed,” he says. Further pushing growth has been the recession, which has heightened unemployment and, in turn, increased demand from job seekers who need to cover up tattoos in order to obtain employment.

There are currently a number of tattoo removal franchises, including: