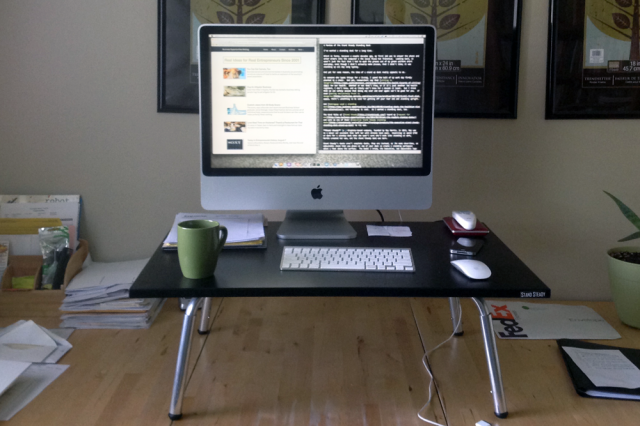 This is funny, because a couple decades ago, my first job in high school was to answer the phone and enter orders into the computer at the local Pizza Hut franchise. Looking back, it wasn’t just the fact that I had to wash the pizza grease out of my green uniform shirt everyday that I didn’t like; it was standing up all day long typing.

And yet for some reason, the idea of a stand up desk really appealed to me.

As someone who types things for a living, I spend the bulk of my work day firmly planted in a chair. Researchers say that sitting is dangerous for our health. Whether or not that’s true, or if it’s just another fad health regiment, I don’t know, and we likely won’t know for a decade at least. But I think that we can safely assume that doing anything over and over again can’t be too good for you. If even eating only fruit is dangerous, there’s something to be said for getting off your rear end and standing upright.

The kind folks at Stand Steady heard my request for one and sent me one of their Executive Stand Steady standing desks to try out. 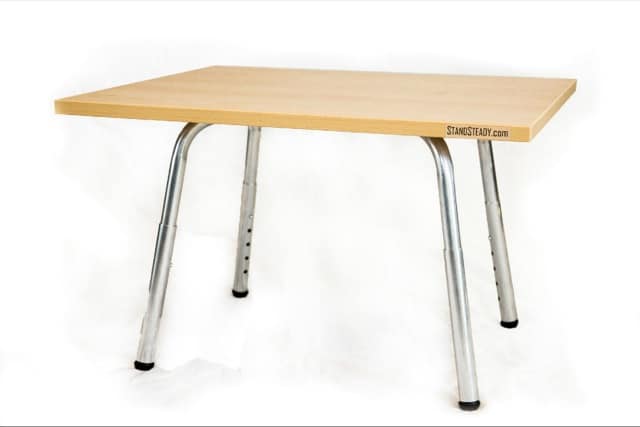 Stand Steady is a Virginia-based company, founded by Day Martin. In 2012, Day was in a minor car accident that left her with chronic back pain. Unwilling to spend the $700 or more for a standup desk when she wasn’t even sure if she’d like standing up at work, Martin invented her own; and the Stand Steady desk was born.

Stand Steady’s desks aren’t complete desks, they are instead, as the name indicates, an adjustable stand that you place on top of your existing desk to create a standing workspace about a foot above the normal work surface. The model I tried, the Executive, has adjustable legs that allowed for various heights, from about 11″ to 15″.

The work surface is surprisingly sturdy. I was originally worried that my iMac would wobble, but I haven’t experience that at all. It is very solid and safe, even when I’m typing like a mad drummer.

The desktop is made from MDF board and painted with a water resistant veneer in black, white, cherry, maple, mahogany or espresso. It has handled my coffee spills without any damage. I have the black one, with chrome legs, and it matches the blacks and the chromes in my office just fine. The feet have rubber soles, so they don’t damage my desk underneath.

The Stand Steady is exactly what I wanted. It didn’t require me to replace any furniture or redecorate, because I hate doing that (note the frames on the wall, still with their default marketing image), and it allowed me to jump right into the world of standing desks. They are a great introduction to the concept, and I’d recommend it first for anyone that thinks they want a standing desk. If you decide that a standup desk is right for you, then if you so desire, you can move onto something more permanent. Or, you might be like me, and find the desk exactly what you were looking for.

Standing desks do have their downsides, and I would be remiss if I didn’t mention them here. The first is applicable to all standup desks, while the second is specifically a problem with the Stand Steady.

Standing up all day makes your tired. The first week or so that I used the desk I was exhausted. I get up very early, and stay up very late, but I usually only take a nap on Sundays after church. But for the first week or so I used the Stand Steady, I took a nap nearly every day. After a couple of days, I begin to have a vague dull ache in my legs and back, that I finally realized could be attributed to standing up all day long. Thankfully, within a week, I was back to normal and never again noticed any fatigue.

I’ve figured out a solution, but it might not be optimal. The Stand Steady is just a shelf that sits above my desk, so it is possible for me to sometimes sit at my desk in a regular chair, and to bring my keyboard and mouse down to the lower level and use my computer from a sitting position, while my monitor remains on top of the Stand Steady. Like I said, it’s not optimal. It requires me to look up to my monitor, which probably has even more health risk associated with it. I’m sure that if I decided against a standing desk, I’d remove the Stand Steady and put my computer back on the regular surface of my desk.

Perhaps a better solution would be to purchase a chair that raises and lowers, like a drafting chair, so that I could continue to use the keyboard from the surface of the Stand Steady even while sitting.

The second downside to the Stand Steady, although it seems to be specific to the Stand Steady, isn’t really the fault of the product. Since the desk sits above your existing work surface, it creates an addition 4.5 square feet of desk surface. If you’re like me, and don’t clean off your desk regularly, you’ll cover that new work surface in no time with papers, cups, folders and all of the miscellaneous stuff that seems to build up on desks like mine. Not only that, but the area under the Stand Steady will fill up with even more junk. So if you’re messy, you’ll find that you’ve just added an addition 4.5 square feet of desk space to fill with junk.

Again, this isn’t Stand Steady’s fault, but you should be aware of it.

In closing, if the idea of a standing desk appeals to you, I’d heartily recommend Stand Steady for your introduction, and potentially as your final solution. Just make sure that you either hire an assistant, or have a loving wife and children who occasionally, when the mess overwhelms them, clean off your desk for you.

The Stand Steady comes in four different models in a variety of colors and styles, and is available on Amazon.com and from StandSteady.com. The model I used is available for $199 on Amazon.

A vcita Review: How This SMB Platform Streamlines the Customer Lifecycle