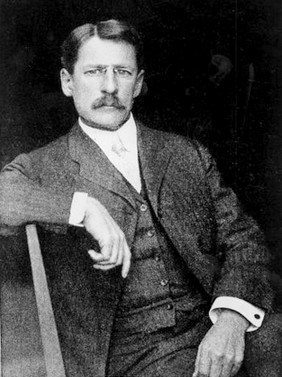 Once compared to contemporaries Thomas Edison, Alexander Graham Bell and George Westinghouse, Frank Sprague, for better or worse, could be called the “father of the modern city,” according to a story in the Connecticut Post.

Two of his key inventions — the first electric motor that ran at a constant speed under various loads and the self-propelled train car–led to the trolleys and later, to commuter trains.

He also developed several improvements to building elevators, making them safe and faster. Sprague’s work allowed cities to sprawl over a larger area and to include taller buildings.

Born in Milford on July 25, 1857, Sprague won a commission to the U.S. Naval Academy in Anapolis, Md., graduating seventh in his class in 1878. A born tinkerer, Sprague came up with the first electric call bell system on a U.S. Navy ship.

He also worked in Thomas Edison’s famous Menlo Park, N.J., laboratory, and throughout the years maintained a business relationship with Edison. Later, he joined with Charles Platt in a new company to make elevators more reliable, including an improved, electric-powered braking system.

The inventor’s grandson, Peter Sprague, said “What he was able to do was to design a rail car that had its own power source. Before, a train had to be pushed and pulled by locomotives.

“When you had 10 cars strung behind you, that didn’t work as well,” the inventor’s grandson said. Urban planners had already tried putting coal- and steam-powered trains into tunnels, but that could potentially asphyxiate riders, he said.

Even earlier, horse-drawn “trolleys” had navigated city streets, leaving thousands of pounds of manure behind. Within 10 years of Sprague’s first all-electric trolley system, which was opened in Richmond, Va. in 1888, horse-drawn public conveyances had all but disappeared.