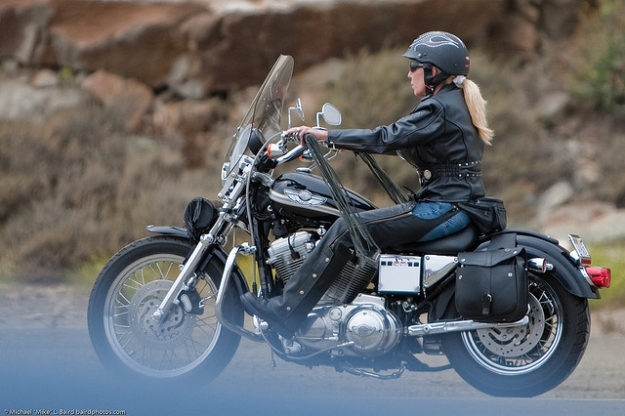 Riders of a certain age sometimes switch to trikes, those three-wheeled bikes with a wide back end. Trikes provide greater stability, but at a cost: The loss of the sensation of floating as you lean into corners.

For many aging riders, riding a trike is nothing like riding a two-wheel motorcycle, Young said.

Young set his mind on developing a way to convert touring motorcycles to a more stable design that would preserve the sensation of riding a two-wheeler while adding a trikeâ€™s stability when the bike comes to a stop.

The result is the Dual Glide Conversion Kit that Young developed and he and business partner, Mike Martein, hope to begin manufacturing in the fall.

â€œIt looks like a traditional touring bike, so you donâ€™t realize itâ€™s a three-wheeler,â€ Young said.

The bike is much narrower than a standard trike, and the rear wheels are hidden by a fender that looks like a typical motorcycle saddlebag.