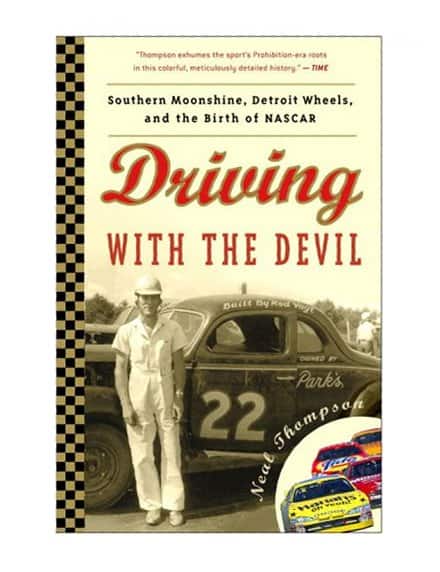 For more on NASCAR, read Driving with the Devil: Southern Moonshine, Detroit Wheels, and the Birth of NASCAR.

Driving with the Devil uncovers for the first time the true story behind NASCAR’s distant, moonshine-fueled origins and paints a rich portrait of the colorful men who created it. Long before the sport of stock-car racing even existed, young men in the rural, Depression-wracked South had figured out that cars and speed were tickets to a better life. With few options beyond the farm or factory, the best chance of escape was running moonshine. Bootlegging offered speed, adventure, and wads of cash—if the drivers survived. Driving with the Devil is the story of bootleggers whose empires grew during Prohibition and continued to thrive well after Repeal, and of drivers who thundered down dusty back roads with moonshine deliveries, deftly outrunning federal agents. The car of choice was the Ford V-8, the hottest car of the 1930s, and ace mechanics tinkered with them until they could fly across mountain roads at 100 miles an hour.

After fighting in World War II, moonshiners transferred their skills to the rough, red-dirt racetracks of Dixie, and a national sport was born. In this dynamic era (1930s and ’40s), three men with a passion for Ford V-8s—convicted criminal Ray Parks, foul-mouthed mechanic Red Vogt, and crippled war veteran Red Byron, NASCAR’s first champion—emerged as the first stock car “team.” Theirs is the violent, poignant story of how moonshine and fast cars merged to create a new sport for the South to call its own.

Driving with the Devil is a fascinating look at the well-hidden historical connection between whiskey running and stock-car racing. NASCAR histories will tell you who led every lap of every race since the first official race in 1948. Driving with the Devil goes deeper to bring you the excitement, passion, crime, and death-defying feats of the wild, early days that NASCAR has carefully hidden from public view.