If you’ve ever tried to take a vacation with children that required the use of both an airplane and a rental car, you know the pain. What do you do about car seats and boosters? Do you take them with you? Have you ever seen how airline employees treat checked baggage?

All of the major car seat manufacturers recommend replacing them after a crash. What’s worse on the plastic structure of the seat, a fender bender, or a five foot drop onto hard cement by an airline baggage handler? Whether or not you really need to replace your seats after something like that is irrelevant, because who’s going to not blame themselves if they’re too cheap to replace the seats and then something, tragic and horrible, happens to their child? That’s just not a risk that most people are willing to take. So you can’t check the car seat.

That means that you’re going to carry-on the car seat. Think everyone looks at you angrily when you try to jam your carry-on, backpack (or purse) and laptop bag into the overhead compartment? Just wait until they see that you’ve also brought a car seat. There has to be a better way! 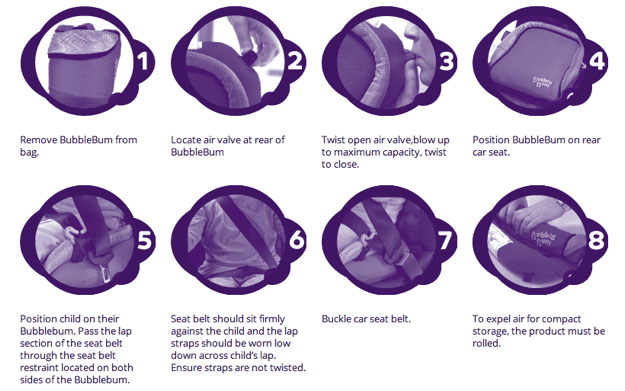 BubbleBum is the world’s first inflatable booster seat. It is perfect for cab rides, the bus, flights or rental cars. Grainne Kelly, the creator BubbleBum invented the device after trying to desperately to get rental car companies to supply her with car seats for her children.

Weighing in at less than one pound, BubbleBum can deflate in minutes making it simple to throw in a backpack or large purse. BubbleBum includes shoulder belt positioning clips in place of arm rests so it’s possible to fit three boosters across the back seat of a car, minivan or SUV.

How well does the booster work, you ask? Well, the Insurance Institute for Highway Safety gave BubbleBum their Best Bet Booster Award in 2011. That should tell you something.