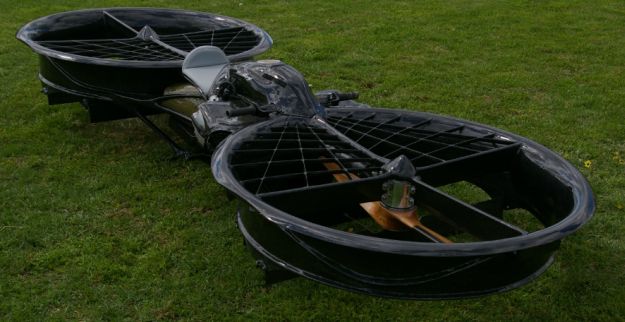 People have been dreaming of hover devices since Back to the Future. Australian inventor, Chris Malloy, is helping make the hover dream come true with his new Hoverbike, reports gizmag.

His efforts were prompted when his helicopter instructor likened a Robinson R22 light utility helicopter to an airborne motorbike. Disagreeing, Malloy set about building something closer to an actual flying motorbike.

The result is a prototype Hoverbike that seats a single pilot on a Kevlar reinforced carbon fiber with foam core frame in between two horizontal spinning propellers constructed from Tasmanian Oak with a carbon fiber leading edge. Instead of the complicated swash plate setup found in single rotor helicopters, the Hoverbike employs the same basic flying principles as a tandem-rotor Chinook helicopter. As with the Chinook, the counter-rotating rotors cancel out each other’s torque reaction, eliminating the need for an anti-torque vertical tail rotor and increasing the efficiency of the vehicle.

Forward and reverse movement is controlled via the motorbike-like handlebar grips. The right grip increases the thrust, while the left grip controls the angle of the control vanes positioned under the rotors to pitch the nose of the Hoverbike down – for forward movement – or up – for moving backwards. Meanwhile, turning is achieved by turning the handlebars left and right, just like a motorbike but with an extra axis that lets them rotate up and down a little, which alters the angle of the front and rear control vanes.

Want one? The bikes are not in production yet, but they can make you a working prototype.