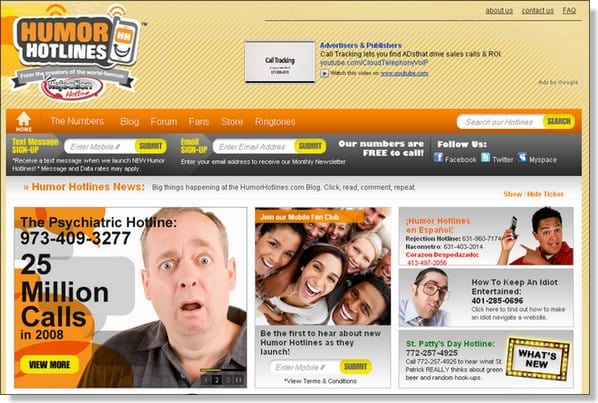 According to a story in Forbes, after a few long nights at the bar in 2001, Jeffrey Goldblatt decided he was tired of overhearing trashy pickup lines and withering put-downs. He teetered home and set up Rejection Hotline–a phone number women could dish out to their pursuers, leading them to this voice mail: “Hello, the person who gave you this number obviously did not want you to have a real number. Maybe you’re not this person’s type; note this could mean that you are short, fat, ugly, dumb, annoying, arrogant or just a general loser.”

The hotline, claims Goldblatt, fetched 600,000 callers in its first year, inspiring him to turn his Don Rickles prank into a business. The Atlanta company, now RH Brands, has morphed into a YouTube of sorts for the phone, offering 100-plus hotlines to inform callers, say, that their friendships have been outsourced to India or that their body odor is horrific.

Remarkably, there’s money to be made in this. Companies such as Sony Pictures, Blockbuster and Dish Network pay for audio ads that are played following the call, if the victim hasn’t already hung up. Other businesses like SendMe Mobile and Thumbplay send mobile text offers for ringtones and videogames. All this produced $2.5 million in revenue last year, up from $841,000 in 2008. Goldblatt claims the service got 69 million calls last year, fed by social networking sites Facebook and Twitter.