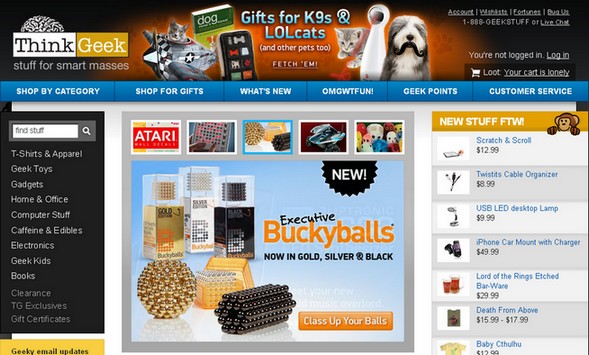 As senior merchandiser for the e-commerce site ThinkGeek.com, Ty Liotta, is responsible for discovering and creating such must-haves for geeks as a T-shirt that sniffs out Wi-Fi hotspots and the Tauntaun sleeping bag, modeled after the animal carcass that saved Luke Skywalker from certain death on the frozen planet of Hoth, reports Bloomberg Businessweek.

Against a backdrop of shrinking U.S. retail sales, the geekonomy is fast expanding. Fueled by the success of items such as zombie dolls and spy cams, Fairfax, Virginia-based ThinkGeek’s sales grew 57 percent in the first quarter of 2010. Analyst Jon R. Hickman of MDB Capital Group expects sales to surpass $64 million this year—up from $49 million in 2009.

After launching in 1995 as an online T-shirt retailer called WizardNet.com, ThinkGeek has evolved into a full- service destination for all things nerd. Liotta heads a five-person “Geek Lab” charged with discovering products that will incite geek pandemonium. It buys some, such as electronics, and contracts out its other tchotchke-based ideas, such as a Wi-Fi-detecting T-shirt, to Chinese manufacturers.

Liotta holds court in an office cluttered with Super Mario Bros. figures, an R2-D2 trash can, and collectible Star Trek action figures. A large Millennium Falcon, resembling the one flown by Han Solo, hangs overhead. A prototype of a night-vision camera sits on a counter.