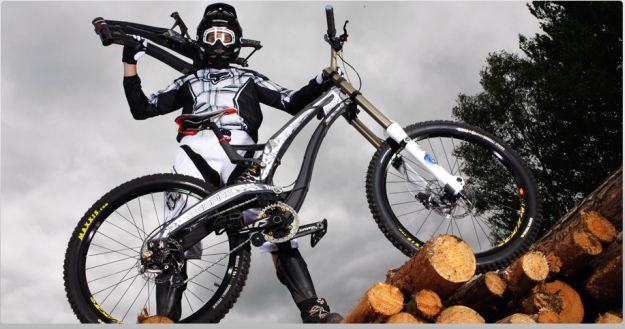 It was Chris Williams’ goal to build the best mountain bike. So he left his job building cars and motorcycles to go in search of his dream. Today his bikes are being raced by riders in the World Cup, reports The Citizen.

His downhill bike is cast from just three parts and comes from his love of the sport. He said: “The AP-1 is the result of sweat, scuffed knuckles, endless late nights in the lab and many a long weekend pounding the trails, pushing the frame to its absolute limits.

“I’ve previously done design work for Jaguar, Land Rover, Aston Martin, Ford and CCM Motoribikes in Blackburn but I left the industry to do this. I was frustrated with the design constraints of existing bikes, the way they are welded tubes. My cycle has just the three cast aluminium parts, which bolt together.”

Chris, from Heapey, has now sold more than 100 bikes which are now used by junior rider Lewis Buchanan and Swede Oscar Harnstrom, who is currently over in South Africa competing in World Cup races. They retail at around £5,000 from specialist dealers.

The bike has also received acclaim from the mountain biking trade press and this year Chris plans to launch a general purpose mountain bike, the MX-6, which can be used for all terrain riding.