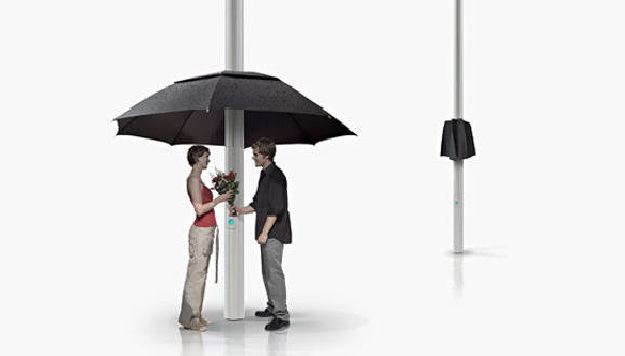 It’s raining, you don’t have an umbrella, and there are no awnings in sight. Mikhail Belyaev would like to have you covered with his latest invention, the “Lampbrella.”

Part street lamp, part umbrella, the lamppost contraption has a sensor that detects when it’s raining and an electric motor that automatically opens a canopy which offers shelter to passersby, Gizmag reports. If no one is under the Lampbrella for two to three minutes, it detects that and will automatically close.

Belyaev’s inspiration, according to Gizmag, reportedly came from watching people scramble for cover from the rain.

“Once, I was driving on a central Saint Petersburg street — Nevsky Prospect — and saw the street lamps illuminating people trying to hide from the rain,” the designer told the site. “I thought it would be appropriate to have a canopy built into a streetlamp.”