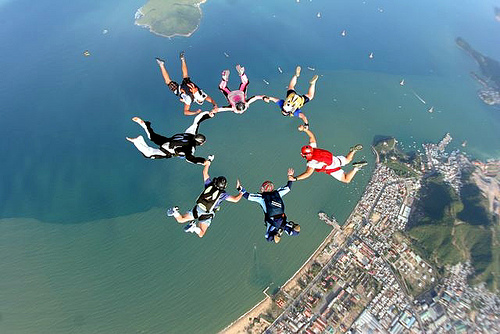 How much does it cost to start a skydiving school? Not too much, actually:

Last month Matthew Fitch [a] former Navy communications officer opened No Limits Skydiving, a parachuting school. After eight years his event-jumping business had hit a plateau of about 30 appearances per year, which generated $100,000 in annual revenues. He hopes that the school, which will charge $225 per tandem jump, will quickly grow to double his business.

For Fitch, investing in the school included a $10,000 down payment on an airplane. He also purchased several $10,000 tandem parachute rigs and spent thousands more building a Web site and printing flyers.

But that doesn’t guarantee a smooth ride. “This is a tough business,” says Ed Scott, executive director of the United States Parachute Association. “You are totally dependent on the weather, because you can’t jump in high winds or low clouds. There’s a lot of overhead, including airplane operation, skydiving-gear maintenance and insurance.”