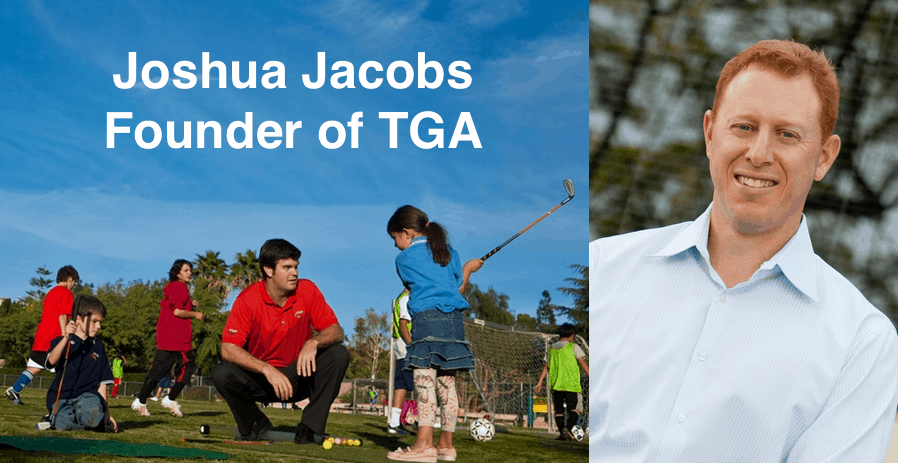 TGA operates the leading after school golf and tennis program in the United States. Their franchised school-based sports model, gets kids off the couch and introduces PreK to 8th graders to sports and sportsmanship. TGA currently has 77 franchise locations in the United States, Canada and Spain.

I recently spoke with the founder and CEO, Joshua Jacobs.

My questions are below in bold. Enjoy!

Hi Joshua. Where did the idea for franchising TGA come from?

The idea came from people calling us for our advice on how to bring golf to schools. After 4 years of honing the model, creating enrichment curriculums and growing the business to over 50 schools, a couple thousand participants a year and four summer camp locations throughout Los Angeles, it hit us like a ton of bricks after researching it didn’t exist across the U.S. We had no vision to franchise the school based model after starting the company in 2003.

The franchised model was brought to life by identifying the needs of our customers. Schools needed before, during and after school programs that were extensions of the classroom, education and character development based, not just sports. Parents wanted the convenience of programs at schools and the ability to drop off or pick up their kids an hour before or after school. Students wanted to be able to experience and be introduced to new sports at their school and participate with their friends. We put together a business and program that satisfied these three needs in the community.

Where do you see your franchise in five years?

Continuing to be the strongest school based model in the country leading to growth in additional golf and tennis markets, as well as adding other sports. The great companies concentrate on what they are best at, what their single economic driver is and what their passion is. For TGA, it’s school based programs impacting youth through sports.

Be more selective with awarding franchises and create a more disciplined and results oriented culture sooner.

Exercise early in the morning or early evening. Office hours between 7:45am and 5pm picking work back up between 9pm and 11pm. If I’m traveling, which is a decent amount the days usually run between 8am and 1am between working with a partner or franchise along with the normal day to day.

Using technology to educate parents and customers on programs children participate in.

I wouldn’t classify any of my four jobs that I’ve had as the worst. The job I learned most from was my first job at Fox Sports straight out of Emory University. It taught me that corporate life at the time was not for me. Apparently being too ambitious in a large corporation isn’t always the best frame of mind.

Constantly move things forward. After you or the company pick a direction to head in or set a goal, keep things heading in that direction. Don’t stray or stay stagnant.

What is one business idea that you are willing to give away to our readers?

Think of everything as real-estate and look to own it.

For people say hello to each other when walking down the street. We’ve gotten away from the simple social interactions. I try and change it by saying hello, even if they are looking down, away or at their phone. Ironically, we apply similar thinking to TGA programs.

Good to Great. It simplifies a very complex business world while helping you create a clear vision and direction you or your company need to head.

During the scene in The Skeleton Twins movie when Kristen Wiig and Bill Hader lip-synced “Nothing’s Gonna Stop Us Now”. It cut the tension of a somber and serious movie and brought us back to remembering the best of times even in the worst of times.

Every entrepreneur who started from scratch turning their passion into a business.

Not one specific mentor.

I have tried to emulate the best traits from many people who have influenced me over the years. Steve Tanner (PGA of America), Darrell Crall (PGA of America), Scott Schultz (USTA), Lee Warner (Mission Pak), Michael Jacobs (Pacific Fruit Processors), Joe Hollday (Hollday and Associates), Jason Friedman (Drive Safer) to name a few.

Where can we find out more about your franchise?

Where can we find your TGA on social media?

Thanks for participating Joshua!

Thanks again for the opportunity!